German chancellor arrives for annual government-to-government confab postponed by Berlin for 18 months because of displeasure over settlements policies. Herb Keinon October 3, 2018 22:13 Against the background of significant differences between Jerusalem and Berlin over Iran and the Palestinians, German Chancellor Angela Merkel arrived Wednesday for her fifth visit to Israel since taking office […]

This will be the fifth time since Trump took office in January 2017 that Netanyahu will meet with the US president. They last met in Washington in March. Herb Keinon September 24, 2018 Amid concern about a crisis with Russia over Syria’s downing of Russian spy plane that Moscow blamed on Israel, Prime Minister Benjamin Netanyahu […]

Russian-Israeli relations have a special character, largely because Israel is home to over a million of our compatriots.” Palestinian Authority television reported Saturday that Dimitry Medvedev, the Russian Prime Minister, will arrive on November 9 in order to assist with peace efforts between the Palestinian leaders and Israel, according to Channel 10.

The report also stated that Medvedev will meet with both Palestinian Authority President Mahmoud Abbas and Prime Minister Benjamin Netanyahu.

On October 18, Russian President Vladimir Putin and Netanyahu exchanged greetings on the 25th anniversary of restored diplomatic relations between the two nations. Both leaders emphasized a joint interest in developing bilateral cooperation, including discussions on urgent international and regional issues.

The two leaders have met four times in the past 16 months.

Medvedev’s trip, according to the Russian embassy’s website said that the visit is intended to strengthen cooperation in various fields.

“Over the years, our two countries and peoples managed to escape from the unfortunate period of mutual alienation and become genuine partners who understand and who know how to respect each other’s interests,” the statement on the website read. “Russian-Israeli relations have a special character, largely because Israel is home to over a million of our compatriots. The Russian-speaking community is a powerful catalyst for the development of bilateral political, economic, cultural, business and cultural ties.”

Herb Keinon contributed to this article.

Israel is successfully expanding its global network at a time of strained U.S.-Israeli relations over Palestine.

Israel’s growing diplomatic, military, and economic ties across the Middle East, Africa and Asia should shatter an enduring myth: that the Israel-Palestinian conflict will make Israel an international pariah.

These ties reflect not only the foresight of Israel’s leaders, the doggedness of its diplomacy and the strength of its economy, but also the rise of Iran in the region and the spread of terrorism beyond it.

Consider the irony. Israel’s ties to the United States and Europe are strained over the Israeli-Palestinian conflict and, particularly with Washington, the Iranian nuclear deal – even though Israel is the lone nation in the turbulent Middle East that shares the West’s values of freedom and democracy.

Meanwhile, Israel’s ties to regional states, African nations and Russia and China are growing due to shared military challenges or economic opportunities – even though Israel has little in common with them.

To be sure, the U.S.-Israeli relationship remains a paramount concern in Jerusalem. Israel relies heavily on U.S. aid as well as America’s backing at the United Nations and other global bodies. The two nations share intelligence and work together on mutual concerns in the region and beyond.

Nevertheless, Israel’s growing global network is enhancing its flexibility on the world stage and reducing Washington’s leverage over Jerusalem. That’s good for Israel at a time of strained U.S.-Israeli relations, and it leaves America and Europe looking obsessed with an issue of reduced global concern.

Consider the contrast. Early this month, the Quartet (the United States, the European Union, Russia and the United Nations) warned that Israeli settlements threaten the viability of a two-state solution to the Israeli-Palestinian conflict, echoing the repeatedwarnings of President Barack Obama and Secretary of State John Kerry. Meanwhile, French President Francois Hollande, who hosted 28 nations in Paris last month as a “first step” toward organizing an international conference to restart peace talks, told Palestinian Authority President Mahmoud Abbas last week that he’s committed to leading global efforts to find peace.

But, across the Middle East, Africa and Asia, nations have far greater concerns than the Israeli-Palestinian conflict and Jerusalem is capitalizing on the opportunities that those concerns now offer. It’s working more closely with Egypt, with whom it has enjoyed a mostly cold peace since 1979, due to their shared concerns over terrorist activity in the Sinai Desert. Israel has allowed Egyptian forces back into the Sinai, while Egypt has allowed Israel to use drones to target terrorists.

An upcoming book about Israel’s occupation of the West Bank won’t tell the whole story.

A retired Saudi general visited Israel last week with a delegation of academics and businessmen, reflecting Riyadh’s growing interest in closer ties with Jerusalem as each faces an increasingly aggressive Iran.

And in June, Israeli Prime Minister Benjamin Netanyahu announced a reconciliation agreement with Turkey, a once-close ally that now faces a host of security concerns both within and on its borders.

However important are these growing regional ties, more impressive are the inroads Israel is making in Africa after decades of isolation in the aftermath of the Six-Day War in 1967 and the Yom Kippur War in 1973 – after which a slew of African nations cut ties to the Jewish state under Arab pressure.

In early July, Netanyahu took the first trip by an Israeli leader to Africa in decades. While he was there, Tanzania announced it would open an embassy in Israel and both Kenya and Ethiopia announced they would push for Israel to receive observer status at the African Union regional bloc.

Since then, Guinea has announced that it will resume ties with Israel 49 years after cutting them, while Israeli Foreign Ministry Director General Dore Gold traveled to Chad to meet with President Idriss Deby. Meanwhile, top officials from Mali, Chad and Somalia – none of which have diplomatic relations with Israel – secretly visited the Jewish state recently, perhaps presaging stronger ties down the road.

Rather than the Israeli-Palestinian conflict, these African nations care about expanded trade with Israel as well as its expertise in agricultural technology, water conservation and counter-terrorism.

For Israel, Africa may be poor, but its economy is growing quickly, presentingopportunities for trade. That’s important at a time when Europe is growing more slowly and threatening sanctions over Israeli settlements.

Perhaps more important, greater ties with Africa will enable Israel to better protect itselfat the United Nations and other global bodies. That two African nations, Rwanda and Nigeria, helped block Palestinian efforts in 2014 to push a deadline for statehood through the Security Council could be a sign of the future.

A wise Washington would see that its obsession with Israeli-Palestinian peace and its propensity to blame Israel unfairly for the impasse are shared by fewer nations in the volatile region and beyond. 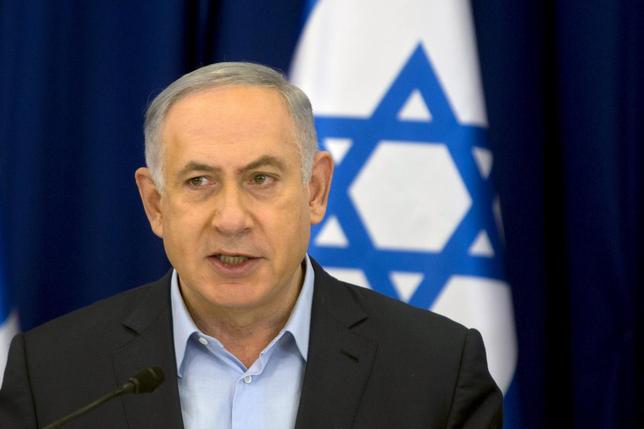 The unsourced report in Yedioth Ahronoth gave no dates or locations for the incidents nor any indication Israeli planes were hit. Russia mounted its military intervention in Syria in September to shore Damascus up amid a now 5-year-old rebellion.

Separately, Israel’s Channel 10 TV said a Russian warplane approached an Israeli warplane off the Mediterranean coast of Syria last week but that there was no contact between them.

An Israeli military spokesman declined comment. Netanyahu’s office and the Russian embassy in Israel did not immediately respond.

Israel, which has repeatedly bombed Syria to foil suspected arms handovers to Lebanese Hezbollah guerrillas, was quick to set up an operational hotline with Moscow designed to avoid accidentally trading fire with Russian interventionary forces.

Visiting Moscow on Thursday, Netanyahu told Russian President Vladimir Putin in televised remarks: “I came here with one main goal – to strengthen the security coordination between us so as to avoid mishaps, misunderstandings and unnecessary confrontations.”

In an apparent allusion to Syria, Putin said: “I think there are understandable reasons for these intensive contacts (with Israel), given the complicated situation in the region.”

According to Yedioth, the reported Russian fire on Israeli planes was first raised with Putin by Israeli President Reuven Rivlin, who visited Moscow on March 15. At the time, Putin responded that he was unaware of the incidents, Yedioth said.

Why the High Court ruling cleared the last legal hoops to making the natural gas deal a reality. Listening to the rhetoric of the critics and the supporters of the High Court of Justice’s landmark decision striking down the government’s natural gas policy, one would imagine that it was a low point of Prime Minister Benjamin Netanyahu’s premiership and a high point for opponents of the policy.

Nothing could be further from the truth.
To understand why, it is important to look not just at the overall result. Admittedly the High Court did strike down, or at least suspend for around a year, the gas policy.

But break down the disparate, multiple decisions and votes the High Court made on several extraordinary issues beforehand, and you will find that while opponents of the deal won the battle and will probably achieve some changes they want in the industry framework, Netanyahu won on a vast majority of the issues – and many of his wins were not obvious ones.
So let’s look at the votes, starting with the votes against the deal.

On one hand, the High Court’s 4-1 decision, with Deputy Supreme Court President Elyakim Rubinstein and justices Esther Hayut, Uzi Vogelman and Salim Joubran voting in the majority against Justice Noam Sohlberg, invalidated the 10-year rule, which means that the gas reservoir developers cannot freeze their desired price and cap on liability.
Also, Rubinstein, Vogelman and Joubran voted 3-2 against Hayut and Sohlberg to strike down the policy, or at least suspend it for a year while the government adjusts it.
Yes, the 10-year freeze of terms such as price and liability was a major aspect of the framework. But it is already evident, only days after the decision, that alternate solutions can be found to give the developers and their lenders their main interest behind the 10-year rule: stability to take a multi-year risk in developing offshore reservoirs.
Stability can be achieved without the 10-year rule. Ideas already being thrown around include the state promising to buy a certain amount of gas if developers cannot sell it at a set price on the free market, committing to cover certain expenses, loan guarantees or incentives for gas buyers abroad.
This has been the focus of celebration and declarations that the country’s democracy has been saved, and of virulent criticism and calls to circumvent the court’s authority.

And that is how almost every High Court’s striking down of a law or policy is greeted in this country.
But again, the real story is in the remaining and less discussed votes.
By a 4-1 majority, with only Joubran dissenting, the justices upheld most of the other aspects of the gas deal, including Netanyahu’s power to override and circumvent objections of the Antitrust Authority on the grounds of national security.