Hamas says Egypt brokered a ceasefire that went into effect at midnight; Israel denies deal, but official says ‘quiet will be met with quiet’

After two days that saw the worst exchange of fire between Israel and Hamas since the 2014 war, a fragile truce prevailed Friday in Gaza, with no rocket attacks or airstrikes since an apparent ceasefire went into effect at midnight.

The Hamas terror group said a ceasefire had been reached “on the basis of mutual calm.” It said the deal was mediated by Egypt and other regional players.

Israel denied there was a truce, but a senior Israeli official told Israel Radio that “quiet would be met with quiet.” There were no instances of violence reported along the border overnight.

On Friday morning, the IDF Home Front Command announced that all security restrictions in the town of Netivot and communities in the central Negev region had been lifted. The military also said that the train service between Ashkelon and the Gaza border town of Sderot would resume.

A senior Hamas official, speaking on condition of anonymity, said the deal had formally gone into effect at midnight. 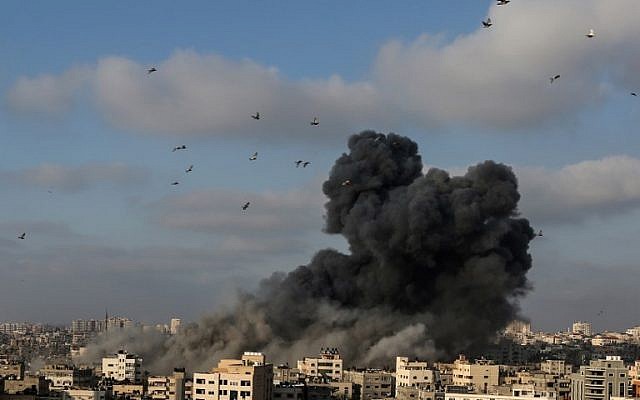 A plume of smoke rises from the remains of a building west of Gaza City that was targeted by the Israeli Air Force in response to a rocket attack that hit southern Israel earlier in the day on August 9, 2018. (Mahmud Hams/AFP)

He said the agreement merely ended the latest two-day bout of violence between Israel and Hamas, adding that Egypt would continue efforts to broker a long-term truce.

The ceasefire reports came just an hour after the security cabinet completed a four-hour meeting on Gaza, instructing the military to “continue acting forcefully” against terror groups in the Strip,

Prime Minister Benjamin Netanyahu convened the security cabinet on Thursday evening to discuss the violence in the south, as IDF jets flattened a five-story building in the Gaza Strip it said served as a headquarters for Hamas’s internal security service. 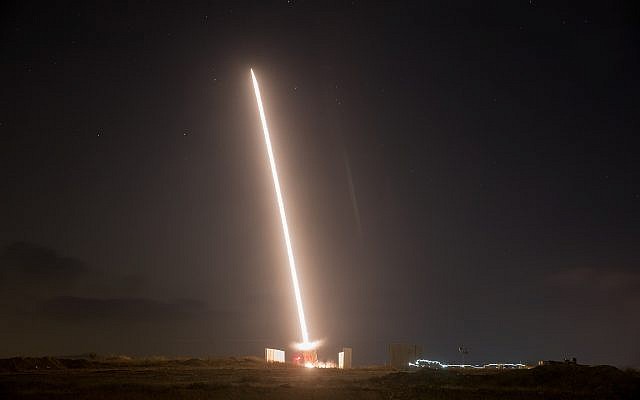 An Iron Dome Missile Defense battery set up in the Southern Israeli city of Sderot fires an intercepting missile on August 9, 2018. Photo by Yonatan Sindel/Flash90

“The [security] cabinet instructed the IDF to continue acting forcefully against terrorists,” a statement from the Prime Minister’s Office said at the conclusion of the meeting.

An Israeli official told reporters Hamas has been seeking an Egyptian-mediated ceasefire throughout the day on Thursday, after an earlier truce that went into effect in the afternoon was breached after some two hours. In the absence of a deal, Israel was able to target “valuable” Hamas military targets in Gaza, the official said. 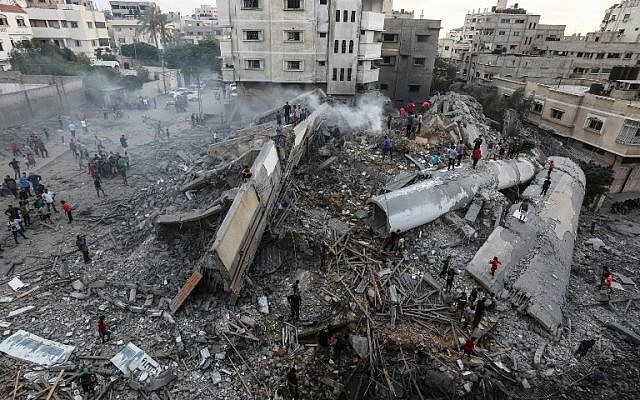 A picture taken on August 9, 2018, shows people inspecting the rubble of a building targeted by the Israeli Air Force in response to a rocket attack that hit southern Israel earlier in the day on August 9, 2018. (AFP Photo/Mahmud Hams)

Earlier on Thursday, the IDF said in a statement its airstrike on the building in northern Gaza came in response to Hamas rocket fire that was launched deep inside Israeli territory. The statement said the building was the headquarters for Hamas’s internal security service, which served as the “operational arm” of the terror group. The building also served as a cultural center. 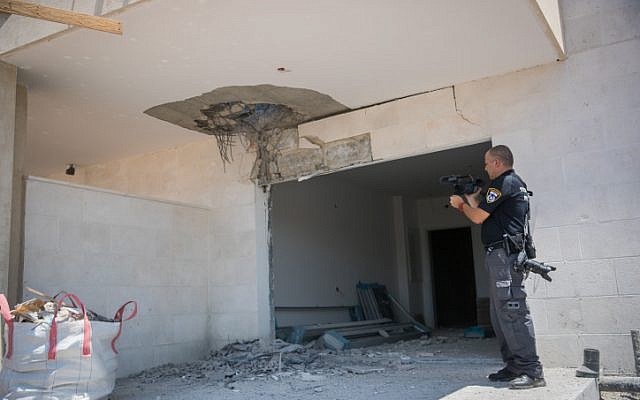 A police officer inspects the damage to a construction site in the southern Israeli town of Sderot near the Gaza border following a rocket hit, on August 9, 2018. (Yonatan Sindel/Flash90)

Also Thursday, Hamas insisted that neither it nor the Islamic Jihad terror group were responsible for Thursday’s rocket attack on Beersheba that ruptured a two-hour ceasefire and marked a significant increase in the level of violence from Gaza.

According to a report by Hadashot news, the Hamas leadership blamed a radical Salafist group in the Gaza Strip for launching the rocket 40 kilometers away, provoking the Israeli retaliation.

On Facebook, Hamas spokesman Hazim Qassim slammed Israel for its “deliberate bombardment and destruction of cultural center,” calling it a “barbaric act that belongs in the Dark Ages.”

Eighteen Palestinians were wounded in the Israeli strike on the alleged Hamas headquarters, according to the Hamas-run Gaza health ministry. The degree of their injuries was not immediately known.

IDF spokesman Lt. Col. Jonathan Conricus said Thursday that Gaza terror groups have fired about 150 rockets at Israel in the past 24 hours, while Israel has struck some 140 Hamas targets in Gaza.

He said the rocket that landed in Beersheba — some 40 kilometers (25 miles) from the Gaza border– required a more powerful, longer-range rocket, marking a significant escalation in violence.

Agencies contributed to this report