Israel faces an uncomfortable truth: it will have to adapt to a shrinking role in the Middle East

Israeli Prime Minister Benjamin Netanyahu completed an unprecedented state visit to Russia in late August, his fourth during the past year. The main subject on the agenda, according to media reports, was Iran and its role in Syria. With the growing likelihood that Bashar al-Assad and his Russian, Iranian and Hezbollah allies have vanquished Islamic State (IS) forces in Syria, Israel is increasingly concerned about the aftermath.

Although Israel has professed neutrality in the Syrian conflict, in truth it has intervened frequently against Assad and his allies

Although Israel has professed neutrality in the Syrian conflict, in truth it has intervened frequently against Assad and his allies. Iranian and Hezbollah weapons convoys transporting advanced armament systems through Syria to Lebanon have been regularly bombed. Senior Syrian, Iranian and Hezbollah commanders have also been assassinated by Israel’s intelligence services.

These attacks have not been directed specifically against Assad, but against Iran and Hezbollah, Israel’s nemesis in the struggle for regional power and influence. Now that their power is in the ascendent, Israel is contemplating what a post-IS world in the region will look like.

A time of fear mongering

Israel fought a war against Hezbollah in 2006, in which it was figuratively held to a draw. Since then, the Lebanese Shia group has strengthened its firepower exponentially. It now has over 100,000 missiles in its arsenal. Its ground forces have fought intensively in Syria and gained invaluable combat experience. Hezbollah may still be no match for the IDF, but Israel knows that it would be a formidable adversary in any future conflict. That’s why the Israeli army has sought to degrade the movement’s advanced weapons arsenal.

Iran, which is Hezbollah’s key ally, has also played a major role on Israel’s northern front. Leaving aside Tehran’s purported drive for a nuclear weapon, Iran’s conventional forces and weaponry have been dedicated to saving the Assad regime, enabling him to reclaim territory lost to IS and other Sunni rebel groups and strengthen Hezbollah’s military capabilities. One very real scenario contemplated by both Israel and the two Shia powers is a likely future confrontation with Israel. That’s why the Israeli army put on a dog and pony show for UN Secretary General Antonio Guterres when he visited Israel last week. During a press conference, they displayed satellite photos which purported to reveal an Iranian missile factory being built inside Lebanon.

But amid all the media coverage of this exposee, no reporter bothered to consult with independent intelligence analysts to confirm the images showed what the Israeli army claimed. Nor did the IDF offer any other supporting evidence.

Yediot Achronot reported that unnamed Syrian opposition sources claimed to have witnessed Russian S400 anti-aircaft batteries being installed next door to Iranian advanced missile manufacturing facilities, which was being constructed on the outskirts of the port city of Tartous. The article seems to be based on this tweet from IntelliNews, an Israeli “intelligence analysis” blog: 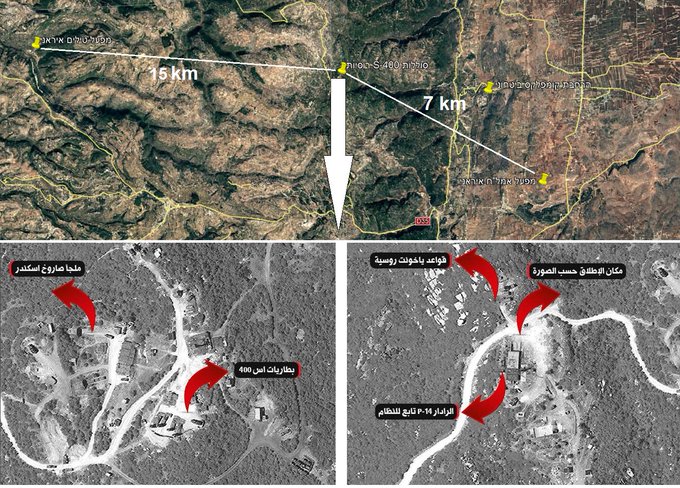 But Shemuel Meir, who publishes a national security blog for Haaretz, tweeted his doubt about the provenance of the information.

Could we talk about latest IDF claims about iran? @ShemuelMeir

In my view, the Intel is not as clear as in Netanyahu public claims. The jury is still out abt parameters of Iran military presence in Syria

“In my view,” he said, “the intel is not as clear as Netanyahu publicly claims. The jury is still out about the parameters of Iran military presence in Syria.”

But the very fact that such a story features prominently in Israeli media attests to the increasingly hysterical tone of coverage of this issue. It’s reminiscent of the strident, almost histrionic, rhetoric used to portray the so-called Iranian nuclear menace in the years before the P5+1 agreement was signed. Miraculously, after the agreement came into effect, little of that sort of coverage was heard again.

Now, it appears that Israel’s leadership is reviving the fear-mongering – a tactic on which the success of the Israeli far-right is based.

During his last visit to Moscow, Netanyahu sought to persuade Vladimir Putin that he must either rein in Iran or break with it entirely. Russian media outlet Pravda even alleged that “according to eyewitnesses of the open part of the talks, the Israeli prime minister was too emotional and at times even close to panic. He described a picture of the apocalypse to the Russian president that the world may see if no efforts are taken to contain Iran, which, as Netanyahu believes, is determined to destroy Israel.”

Israel even threatened that, if Russia didn’t take care of this problem, then Israel would. That seems more bravado than anything else: Israel has relatively few options. Even if it goes to war again with Hezbollah, it will only be able to wound its forces. Then there are the Iranians. Israel cannot afford a direct assault on Iran’s military or on Iran itself. To do this, Israel would likely need the backing of the US, tacitly if not explicitly. While President Donald Trump shares Israel’s antipathy toward Iran, it is unlikely he can persuade what he likes to call “my generals” to become embroiled in yet another Middle East war. Trump may give a green light to Israel, but the IDF will likely be largely on their own in pursuing such an adventure.

As Al Rai correspondent, Elijah Magnier, wrote in his blog, Israel has narrower and narrower strategic options on its northern border with Syria. Assad’s likely victory will only unify his regime and strengthen the country’s territorial cohesiveness.

That runs contrary to Israel’s hope that Syria would devolve into regional cantons, allowing it to dominate the Golan and buy the peace there. For the past few years, it has been doing this by supplying arms, equipment and intelligence collaboration to al-Nusra forces fighting against the Assad regime and Hezbollah. Israel hoped to create a buffer zone separating Syria from Israeli-occupied Golan and so guarantee peace there.

Instead, Israel finds Iran and Hezbollah triumphant and prepared to face it both in Lebanon and Syria. As Magnier notes, Syria too will be more than willing to confront Israel on the Golan front in order to recover territory conquered in 1967:

“Today Israel is aware Assad won’t give up on the Golan and that the unique and intensive military experiences he and his allies have acquired in over 6 years of war can and will create a real headache for Israel, forcing it to fight back and ultimately give up the Golan heights.

The only objective Netanyahu is trying to reach with Putin is to secure a grip over the Golan – a reassurance the Kremlin can’t give. This is also why Israel rejected the de-confliction deal between Russia and the US in the south: it offers no guarantee for Israel to keep the Golan Heights, nor can Russia be part of the Israeli-Hezbollah conflict.”

Netanyahu perhaps has not realised it – but Israel is far more constrained in what it can do under these circumstances.

That’s why Netanyahu appealed to Putin. It was a desperate move. Putin sits on the victor’s podium in Syria, having achieved his strategic aim of projecting power in the Middle East, just as the former Soviet Union once did. Russia has done so in concert with its two powerful allies.

Iran, in particular, is not just a military ally, it is also a major buyer of advanced Russian weapons systems and engineering know-how. Russian engineers and scientists built the Bushehr nuclear facility.

Chatham House estimates that Russia’s arms exports to the Middle East range from $1.2bn to $5.6bn per year out of an overall annual arms export market of $14.5 billion. In 2016, the two nations announced an agreement to buy $10 billion in Russian tanks and war planes.

How could Netanyahu have thought that Putin would abandon his ally and fall into Israel’s lap in gratitude?

How could Netanyahu have thought that Putin would abandon his ally and fall into Israel’s lap in gratitude? What would be in it for Putin, the victor in a long-running war?

The very premise of Netanyahu’s trip seemed to be based on little more than hubris – that he somehow could personally persuade the Russian leader of the righteousness of Israel’s position. But Israel’s prime minister made a fundamental miscalculation – and the world media roundly derided the results, almost universally describing the talks as a failure.

Israel wants to end the Iranian presence on its borders: Moscow can’t accommodate Israel due to the Russian-Iranian strategic relationship and energy collaboration. Moreover, the Russian intervention in the Syrian war was decisive in the victory of Assad but would not have succeeded without the Iranian (and allies) ground troops to occupy the territory and fight the urban wars.

Hamas and Iran kiss and make up

As if this wasn’t bad enough for Israel, last week Hamas’ senior leader Yihyeh Sinwar announced that his group had reconciled with Iran after a break of five years.

Many Palestinians had been hostile to Assad’s brutal crackdown on the opposition to his regime, some of whom were Palestinian. This drove a wedge between Palestinians and Iran, which has backed Damascus.

But now Sinwar says that Iran is Hamas’ “largest financial and military backer.” This is bad news for the Israelis, who’ve relished the increasing isolation of the group in Gaza and the squeeze that Mahmoud Abbas and the Palestinian Authority has put on them by turning off electricity and stopping employee paychecks.

Israel does have one strong card: Donald Trump. The US president sees eye-to-eye with Netanyahu on virtually every major issue, including Iran. Can the two of them upset the apple-cart in the region? While this is possible, it seems unlikely, given that the only one of the P5 nations – the US – is prepared to abandon the nuclear deal. The European signatories support the deal and say that Iran is complying with its terms. Iran has also signed lucrative trade deals with numerous foreign companies to supply everything from oil-drilling equipment to passenger jets. Few foreign leaders are prepared to abandon this new trade outlet for their export markets.

Israel may have to adapt to a shrinking role in the region, one that means it cannot now exert its influence anywhere it wishes, be it in Gaza or the West Bank, Syria or Lebanon. It faces a rising regional power in Iran which, like Israel, has a highly educated class of professionals who are engineers, scientists and entrepreneurs.

These Iranians are just as ambitious as their Israeli counterparts were at the outset of their technology startup boom. The question is: will Israel make room for such a rival, or will it fight to death to stop the new competition?

It is all as Magnier suggests: “Israel should prepare itself to adapt and live with a new reality where the two superpowers are now at its borders, that the sky in Syria and Lebanon is no longer its exclusivity, and that it is the right moment to accept the new situation and powers on its borders: the ‘axis of the resistance’ and with it Russia.”

– Richard Silverstein writes the Tikun Olam blog, devoted to exposing the excesses of the Israeli national security state. His work has appeared in Haaretz, the Forward, the Seattle Times and the Los Angeles Times. He contributed to the essay collection devoted to the 2006 Lebanon war, A Time to Speak Out (Verso) and has another essay in the upcoming collection, Israel and Palestine: Alternate Perspectives on Statehood (Rowman & Littlefield).

The views expressed in this article belong to the author and do not necessarily reflect the editorial policy of Middle East Eye.