Tehran, Iran (CNN)Iran’s foreign minister has warned of “all-out war” in the event of US or Saudi military strikes against his country, and questioned whether Saudi Arabia was prepared to fight “to the last American soldier.”

Javad Zarif told CNN that Iran hoped to avoid conflict, adding that the country was willing to talk to its regional rivals Saudi Arabia and the United Arab Emirates. But Iran would not hold talks with the US unless Washington provided full relief from sanctions as promised under the 2015 nuclear deal, Tehran’s top diplomat said.
He again denied that Iran was involved in weekend attacks on Saudi Arabia’s oil facilities, which dramatically ratcheted up tensions in the region. Zarif said Yemen’s Iranian-backed Houthi rebels, who claimed responsibility for the attack, have stepped up their military capabilities and were capable of conducting a sophisticated operation such as the one that knocked out half of the kingdom’s energy production.
Probed further, however, Zarif was unable to provide proof that Houthis launched the drones and missiles. “I cannot have any confidence that they did it because we just heard their statement,” said Zarif. “I know that we didn’t do it. I know that the Houthis made a statement that they did it.” 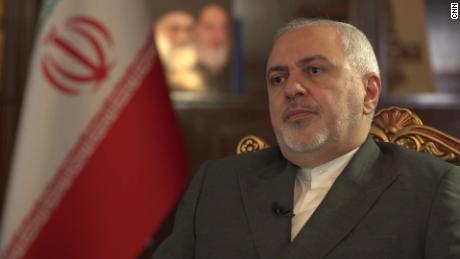 Iran’s top diplomat said Tehran would not start discussions with the Trump administration before full sanctions relief.
US and Saudi officials have repeatedly dismissed Houthi claims of responsibility in the weekend attacks. Instead, they have pointed the finger at Iran.
Read More
At a news conference on Wednesday, Saudi Ministry of Defense spokesman Turki al-Malki said weapons that missed their targets were found to be Iranian-made. He also said that investigations revealed that the drones and missiles were likely launched from the north of the kingdom, and not from the direction of Yemen, which lies southwest of the country.
War drums have become louder since the attack. US President Donald Trump has called on Pentagon officials to plan potential responses. He tweeted that the US was “locked and loaded” but was waiting for Saudi Arabia’s rulers to decide on a path forward.

US Secretary of State Mike Pompeo, who was the first official to name Iran as the culprit, is in the Persian Gulf visiting Saudi and Emirati leaders.
Asked what the consequence of a US or Saudi military strike on Iran would be, Zarif said: “All-out war.”
“I make a very serious statement about defending our country. I am making a very serious statement that we don’t want to engage in a military confrontation,” said Zarif. He added that a military response based on “deception” about the weekend attacks would cause “a lot of casualties.”
“But we won’t blink to defend our territory,” he said.
Zarif added, in a reference to how Saudi Arabia’s critics believe Riyadh relies on the US to fight on its behalf: “I think it is important for Saudi government to understand what they are trying to achieve. Do they want to fight Iran until the last American soldier? Is that their aim?”

Returning to the negotiating table

In the interview, Zarif dismissed the possibility of negotiating with the Trump administration, unless the US were to give Iran the full sanctions relief promised under the nuclear deal. Iran Foreign Minister: Don’t see any reason to talk to US

Iran Foreign Minister: Don’t see any reason to talk to US 05:35
Trump pulled out of the deal, formally known as the Joint Comprehensive Plan of Action (JCPOA), in May 2018. He has since imposed more than 1,000 individual sanctions on Tehran, which culminated with an oil embargo this May. Zarif himself is also sanctioned.
“(The JCPOA) is an agreement that we reached with the United States. Why should we renegotiate? Why should we start something else which may again be invalid in a year and a half,” said Zarif.
Sanctions relief, however, could change Tehran’s calculations, opening the possibility for talks.
“If they lift the sanctions that they re-imposed illegally then that’s a different situation,” said Zarif. “Then we would consider (talks).”
US sanctions have crippled Iran’s economy, causing the currency to plummet and prices to soar. The economy has contracted and food and medical shortages are rampant. “They’ve done whatever they could and they haven’t been able to bring us to our knees,” said Zarif. 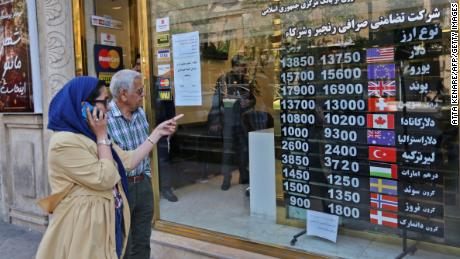 Iranians have been hit hard by US sanctions, causing the currency to plummet and prices to soar. (File photo)
Zarif is set to accompany President Hassan Rouhani on a visit to the United Nations General Assembly in New York later this month. Rouhani, however, has said that he may cancel his appearance if visas for his delegation are not issued imminently.
“(The US) haven’t issued visas for the advanced team of our President. That makes it very difficult for him to go,” said Zarif. Asked if time has already run out, he added: “Well I am not saying too late but it is very near too late.”
Earlier this year, Zarif announced a shock resignation that he quickly walked back on. In the interview, the Iranian top diplomat said the incident was not “personal” and that he rescinded his resignation when he was “publicly assured” that he was still “in charge” of the country’s foreign policy.
Iran’s top diplomat — who spent several years in the United States as a student and later as UN ambassador — said he misses little about the country that now has him on its sanctions list. But he says he longs for the days of “rational” policymaking.
“What I miss is rationality. What I miss is prudence. I think the US deserves to be more rational,” said Zarif.