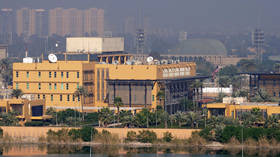 FILE PHOTO. A general view of the U.S. Embassy at the Green zone in Baghdad, Iraq. ©  Reuters
Follow RT on

Five rockets have reportedly landed in the vicinity of the US embassy in Iraq’s capital city of Baghdad. It was not immediately clear whether the projectiles inflicted any damage or casualties.

The missiles hit Baghdad’s heavily-fortified Green Zone, AFP said, citing security sources. One of the sources said that five ‘Katyusha rockets’ have landed near the compound, while another put the number of projectiles at three.

The unguided volley landed not far from the US mission late on Sunday. Warning systems of the facility were activated and people were advised to seek shelter, footage from the scene shows.

#Breaking “Seek shelter” We are still advised to take cover in Union III, just across the road from the #US embassy in Green Zone #Baghdad. A few rockets allegedly hit nearby. I didn’t hear any explosions as we were in hard cover. pic.twitter.com/pj9U5KPUqi

The Green Zone has seen a string of similar incidents in recent weeks, with unknown attackers repeatedly – and quite imprecisely – targeting the US embassy with unguided projectiles. Other US facilities across Iraq have sustained rocket fire on several occasions.

Also on rt.com ‘Million-Man March’ kicks off in Baghdad to demand US troop pullout (VIDEO, PHOTOS)